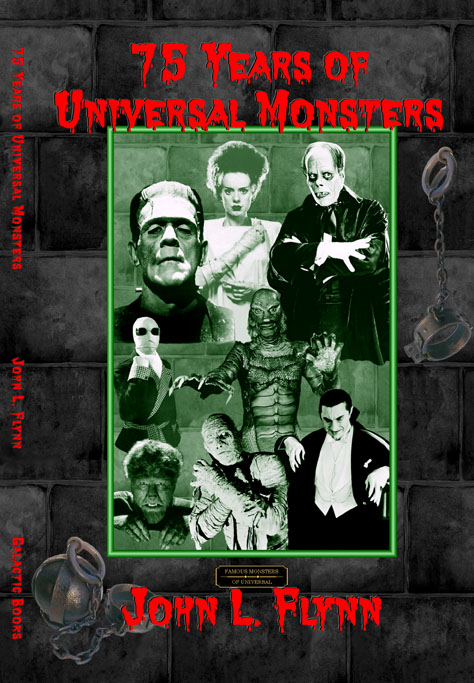 75 Years of Famous Monsters (August 2006) by John L. Flynn, Ph.D. They were like Gods. Count Dracula, Frankenstein's Monster, the Phantom of the Opera, the Bride of Frankenstein, the Wolf Man, the Mummy, and Invisible Man, and the Creature from the Black Lagoon formed a modern-pay pantheon that ruled the mythical kingdom of Hollywood. They dwelled at Universal, their Olympian-like home in the hills of northern Los Angeles. Their stories were the stuff of legend in the most successful horror films ever made. For twenty-five years, from 1931 to 1956, these famous monsters of filmland headlined box office marquees around the world. This book is a loving tribute to the immortal gods and monsters that we celebrate on this seventy-fifth anniversary of the Golden Age of the horror film.

Galactic Books is proud to present 75 Years of Universal Monsters by three-time Hugo Nominee John L. Flynn. This funny, informative and well-documented work tells the complete story with 125 accompanying photos and illustrations, factoids, trivia, and interviews of Universal Pictures' famous monsters. Regrettably, the print copy has now sold out; however, an eBook version for iPads, Kindles and other PDF readers is now available. Click on the button above.