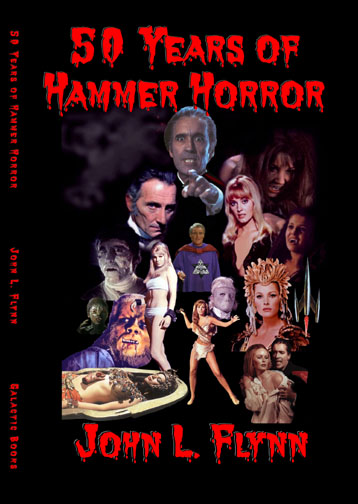 50 Years of Hammer Horror (December 2006) by John L. Flynn, Ph.D. is the follow-up book to his popular 75 Years of Universal Monsters. Hammer Film Productions was the most successful independent film company in the world. Between 1935 and 1983, the company produced more than 250 motion pictures and television shows, and their signature productions headlined theater marquees all around the globe. Those productions included thrillers, comedies, historical dramas, and science fiction. The company was best known for its series of gothic horror films, now termed Hammer Horror, that were produced from the late Fifties to the middle Seventies. During those nineteen years, from 1957 to 1976, Hammer Films reigned supreme as the world's premier producer of horror movies, enjoying worldwide financial success and creative freedom. Chief among its box office successes were new incarnations of Frankenstein, Dracula, the Mummy, the Werewolf, the Phantom of the Opera, and many others. In fact, Hammer emerged as the successor to Universal Pictures' horror film legacy. Virtually, every creature-feature Universal had filmed in black-and-white monochrome, Hammer remade in glorious Eastman Technicolor. Regrettably, the print copy of this book has been sold out; however, an e-Book version for iPads, Kindles and PDF readers is now available.